I have enjoyed my self-set 100 day project. It achieved what I wanted - a reboot of my interest in sewing. Last year I found it hard to get to my machine or to really want to be making anything.

The little project that involved setting aside some time each day to make something simple without the usual constraints was fun. However, over the last week or so, I realised that other projects were rapidly forming in my mind. My wanting to sew was back! I also started to think about how I might like to put the blocks together, and decided that I wanted to sash them. A 6x8 grid seems like a nice proportion and will be a good sized lap quilt once I've added sashing. So at #48, I have called a halt to production. 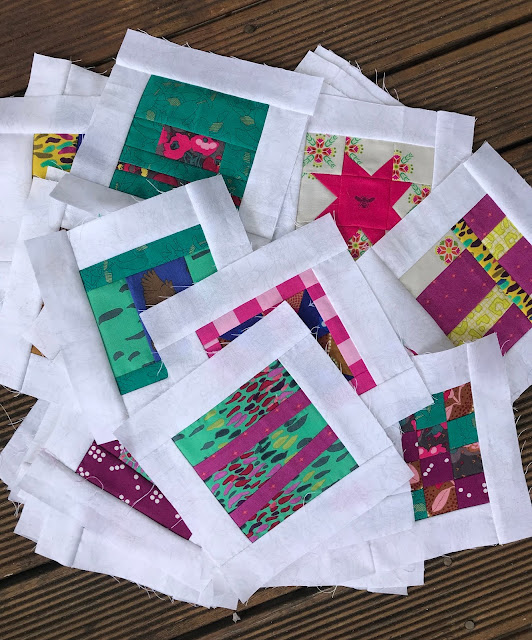 I found myself working across several days on a particular theme, making two, three or four variations of a shape I was enjoying. 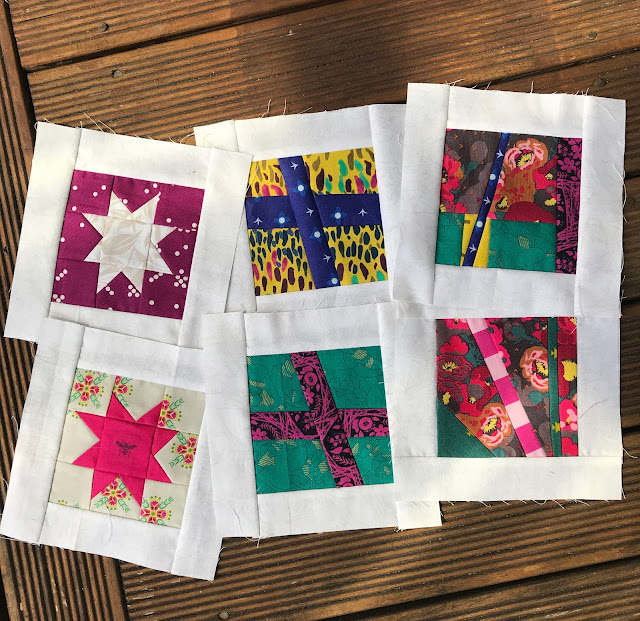 With other blocks, I had an idea in mind and made the block I planned (on the right below). At other times my quilt math ability was on holiday and I ended up with some interesting improvisation in order to make use of the mis-sized pieces. 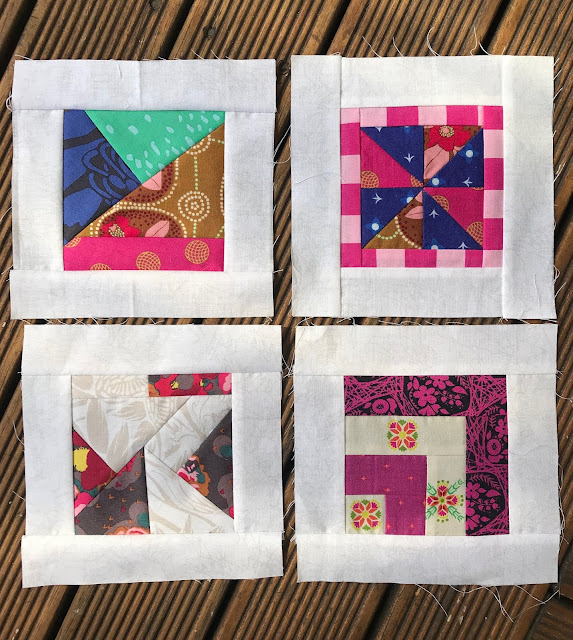 Now to decide on a neutral solid for the sashing.

I spent some time over the weekend making a test tree from the pattern Painted Forest by Blue Nickel Studios. Some of you might be familiar with the many lovely versions of this pattern that are on IG: 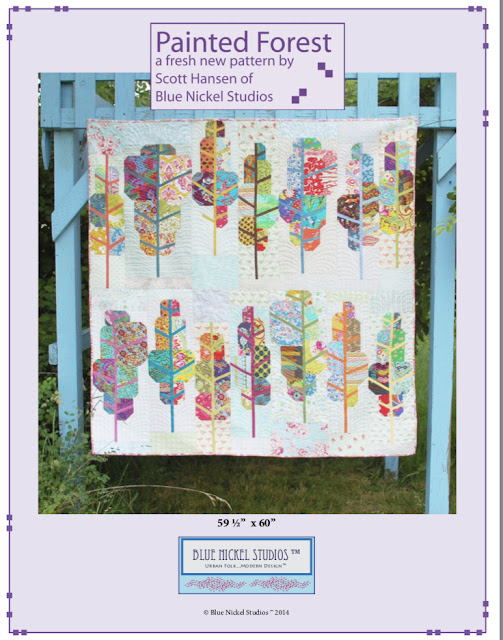 I have in mind a vague idea of a wall hanging that I want to make which only needs one of these trees in it. I couldn't quite visualise the dimensions of it, so used a bunch of scraps to make this: 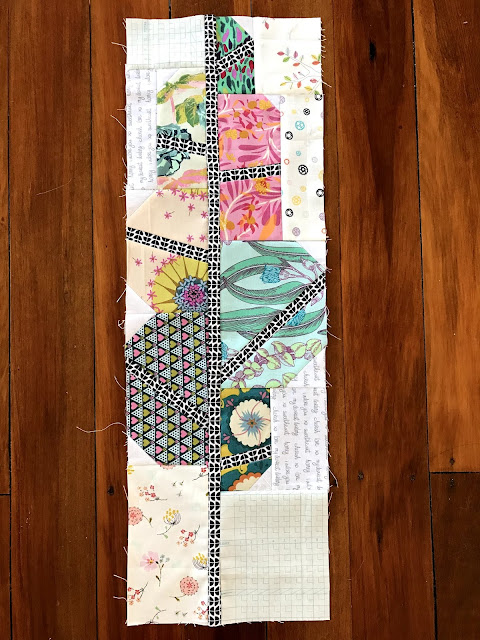 This tree is fourth from the left in the top row of the pattern. Although I was just using scraps from my scrap bin, not worrying too much about the overall effect, I can see a few things I would prefer to do differently next time.


So overall, a worthwhile experiment I think.

I checked back to see when I started this quilt, it looks to me like I pieced the top in March 2013. Yikes!

It has been sitting in a cupboard, all folded up, in a quilt sandwich since sometime in 2013. I think what happened is that I started quilting it in straight lines with some variegated thread, and wasn't that thrilled with either the thread, or my not-so-straight lines. 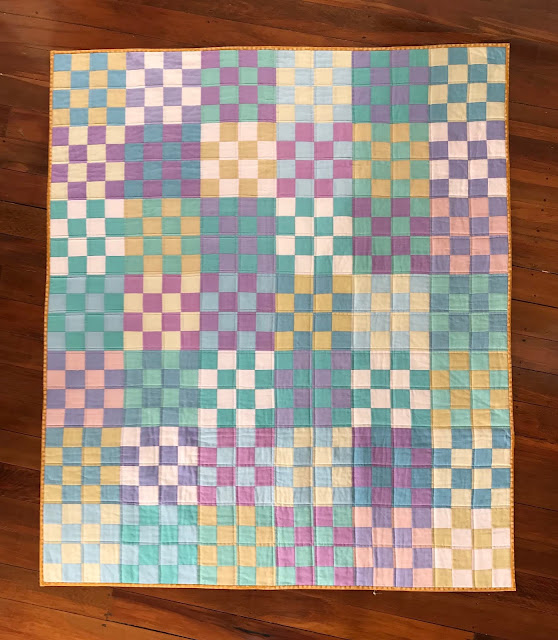 Fast-forward a couple of years (we won't count exactly how many) and I am way less of a perfectionist. Now, I am satisfied with just getting things finished. 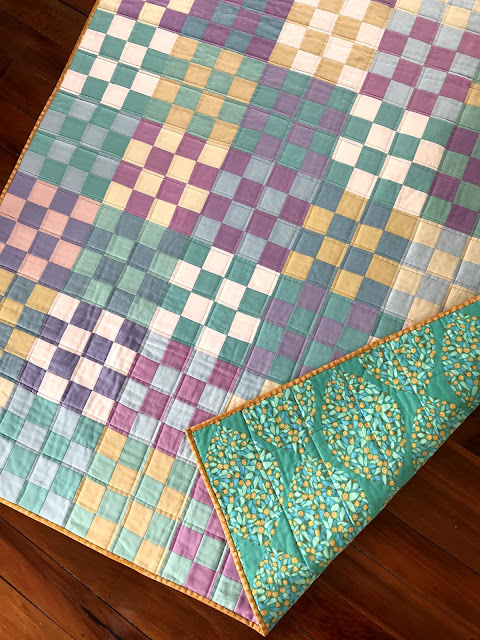 I'm actually really pleased with how it looks. It's been a while since I worked with solids and I like the effectiveness of the simple piecing. I used Oakshott shot cottons - I'm pretty sure I bought a bundle of F8s. The Anna Maria Horner fabric on the back is perfect, and so too is the much more recent Carolyn Friedlander Doe fabric I used for the binding. 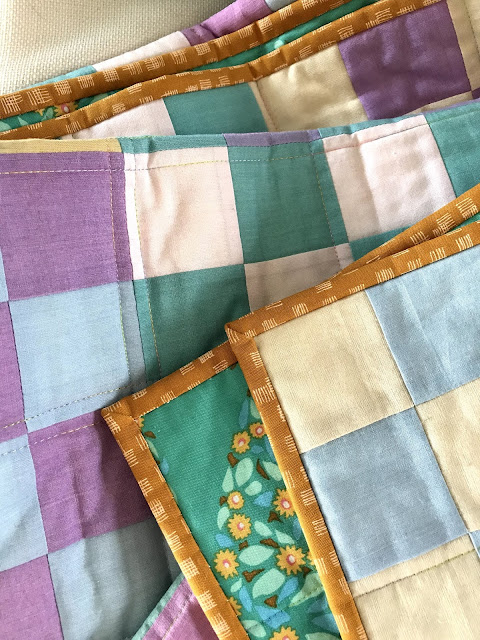 The variegated thread is really silky, so my machine loved it. It gives quite a subtle effect - you really have to be looking to notice it. Goodness, why did it take me so long to figure all that out?
Posted by Megan at 18:26 1 comment:

I'll probably only post a few updates about my 100-day project along the way, but thought 16 seemed like a nice even number for an initial photo. I've had to get a few days ahead because I'm away for work this week. 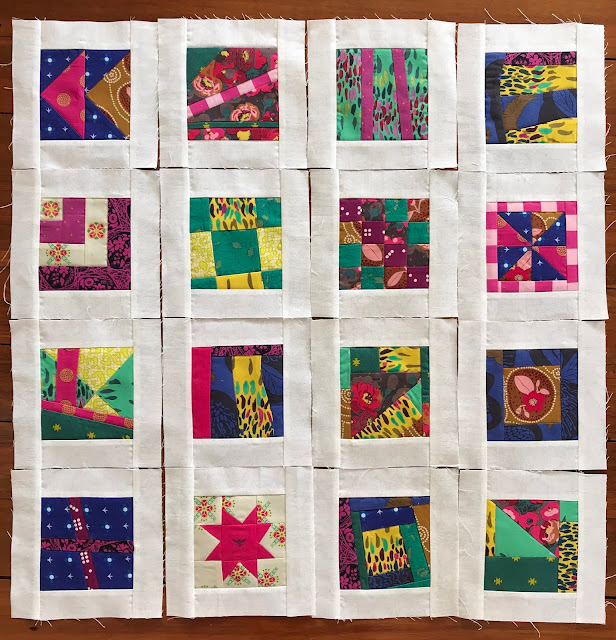 I've really enjoyed the process so far. The blocks are usually quick to make - I like the way I can make something simple or something that takes a little longer depending on how I feel.
Sometimes I feel like making something a bit fiddly and precise: 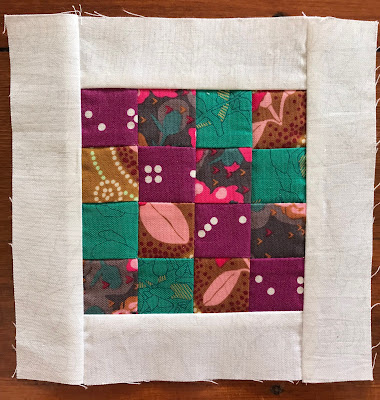 Other times I improvise, cutting shapes or scraps and seeing where I end up: 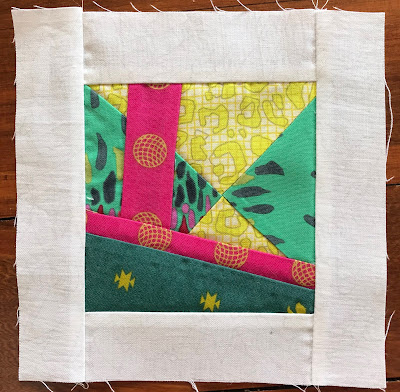 I was working on another quilt at the same time this week so I used a couple of blocks that were in that quilt as a reminder of the other project: 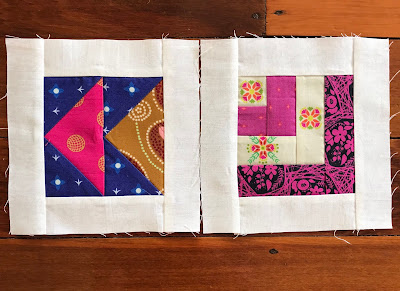 It's a new year!
I see it is just a little over two years since I last posted anything here, that's Instagram for you. I have decided that 2019 will see a return to the blog for me. I miss having a record of my thinking as I make.

I thought I would start the new year with a small 100 Days project. I put together a pile of jewel-bright fabrics and plan to make a 4.5" block a day for the next 100 days. The rules are very few. No unpicking. No deciding something is ugly and putting it in the bin. No fussing about colour placement. Any block goes; improv, fiddly, straight lines, or curves. 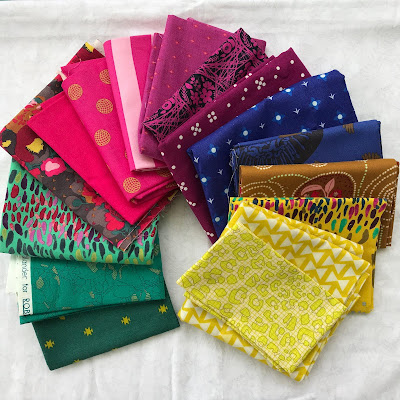 I've cut a pile of fabric for small borders as well so that busier days ahead are accounted for. I'm using an Alison Glass Sun Print for the borders - it has tiny birds and insects on it which you can see if you look carefully. It's a really nice neutral which I have used in a few projects now. 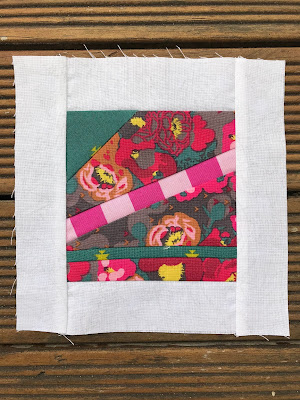 I started the Ginger Crush BOM organised through Treehouse Textiles in 2015 and although I had finished it by about April this year, it took me a while to find a backing and get it quilted. I'm really pleased with the final product. The colours are quiet but not washed out and the simple quilting gives it a soft snuggly texture. It fits perfectly on my bed, just in time for those hot summer nights when you just want something light over your sheets. 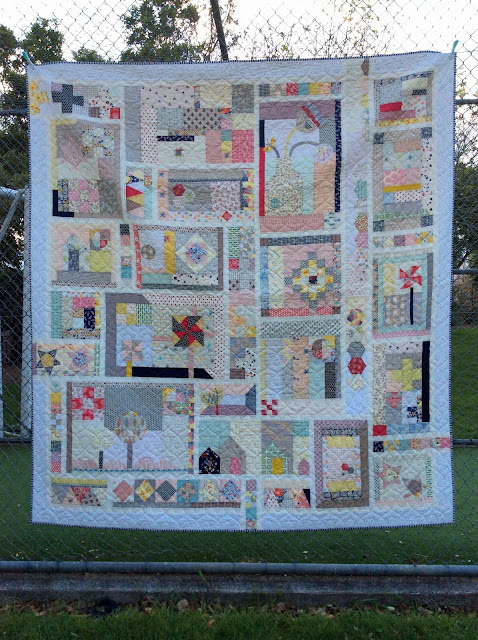 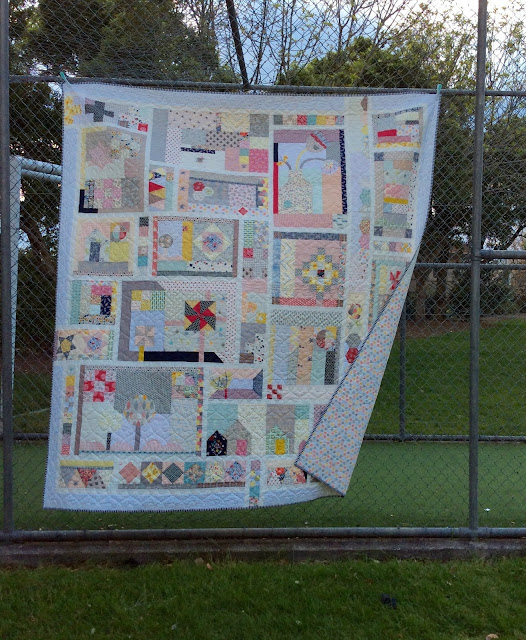 Well fellow Gyspy-wifers, it's November, so some of you might be finishing up this month! I'm really pleased to have my second version complete and ready for quilting. Without further ado, here she is: 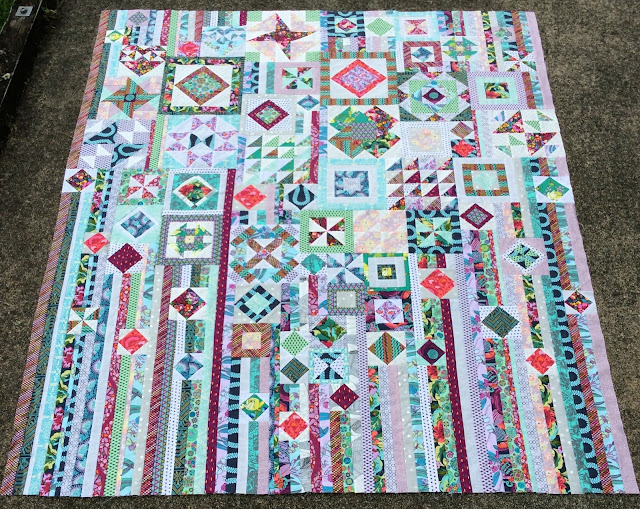 And if any of you are curious about what Gyspy Wife#1 looked like after quilting, here she is: 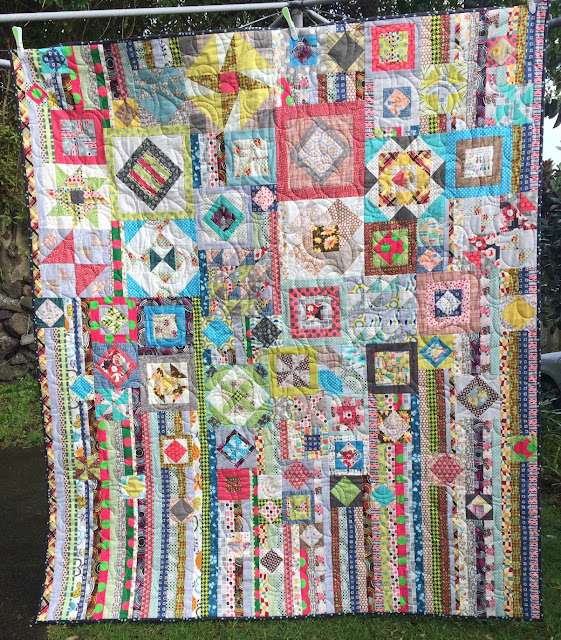 I have a box of scrap fabric from the version I have just finished, so I have plans to make another Jen Kingwell pattern 'Bonnie Lass' from her book Quilt Lovely. I'm thinking I might have to call the new quilt 'Gypsy child' :-)

Thanks to those of you who have stitched along with me and left encouraging comments. Thanks also to the awesome Hydeeann who did all the quilty maths and created the very helpful spreadsheets to supplement the pattern. High fives all round!